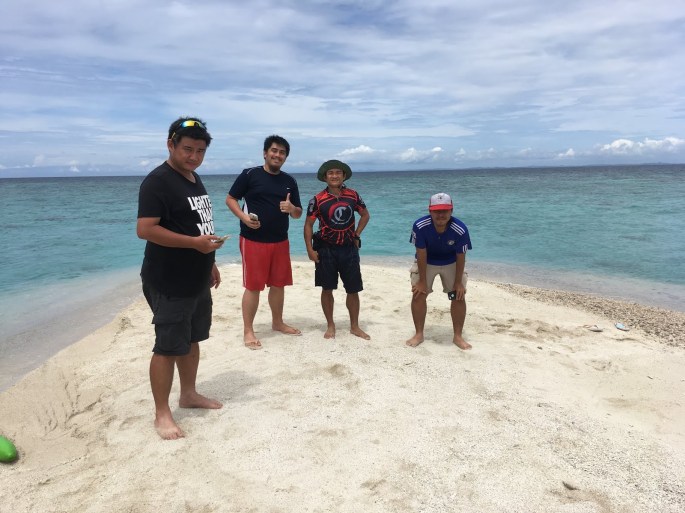 The beauty (and challenge) in bike touring the Philippines is that the country is comprised of several islands. Being an archipelago, each region of islands possesses interesting characteristics.

Marinduque which is considered as the geographical center of the Philippines (Region 4-B), is dubbed as the heart of the country. I have heard of several bikers who have done the loop and they claim that the island’s beauty can be attributed to its (relatively) untouched beaches and neighboring islands as well as its lush vegetation.

The succeeding sections are some notes from our recent bike tour around Marinduque. While others have documented this in detail, we provide our own account which may be helpful if you intend to go around by bike.

Taking a bus from South Station Alabang, we traveled all the way to Dalahican Port in Lucena Quezon (Bus from Alabang to Lucena is 180 pesos). Some of our co-riders took the JAC liner at Buendia and we all met at the port before 12 midnight

Depending on traffic and other conditions, expect the trip to last about 3-4 hours. We arrived at the port around 1130 and got tickets for the boat ride at 330am (Take the Seahorse, it’s 260 pesos for the trip). 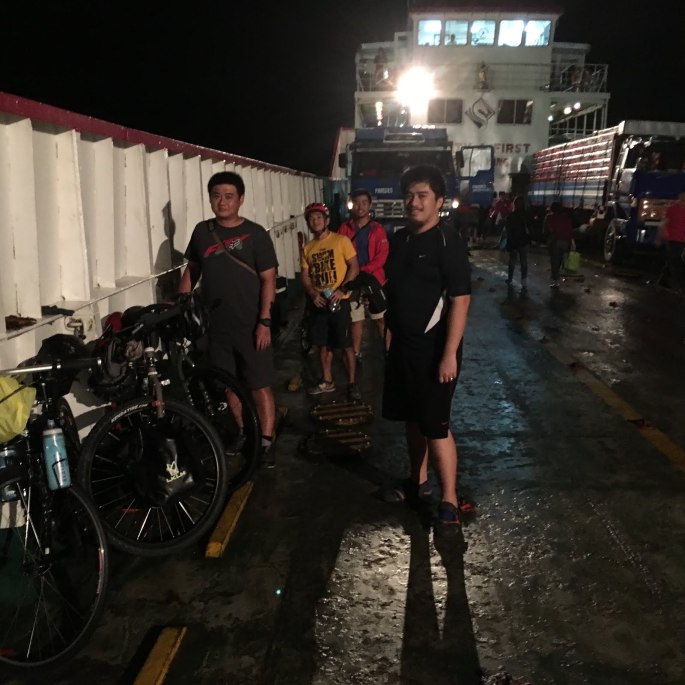 Parking our bikes at the loading dock for vehicles, we had to get rest for the trip which lasted about 4 hours (the waved were rough). Arriving at the port, we started pedaling at 8am. Our goal for the day is to reach Poctoy White Beach at Torrijos-one of the towns in Marinduque. We took the counter clockwise route-the longer yet less brutally harsh choice (a few climbs a lot of flats and plenty of view)…pedaling to the different towns, it was unavoidable to take pics of the beautiful seaside

As we pedaled our way to Mogpog-Boac, we got to see two bike shops, one even had a small eatery where took breakfast. People in Marinduque seemed very warm and welcoming as they mentioned several places to visit 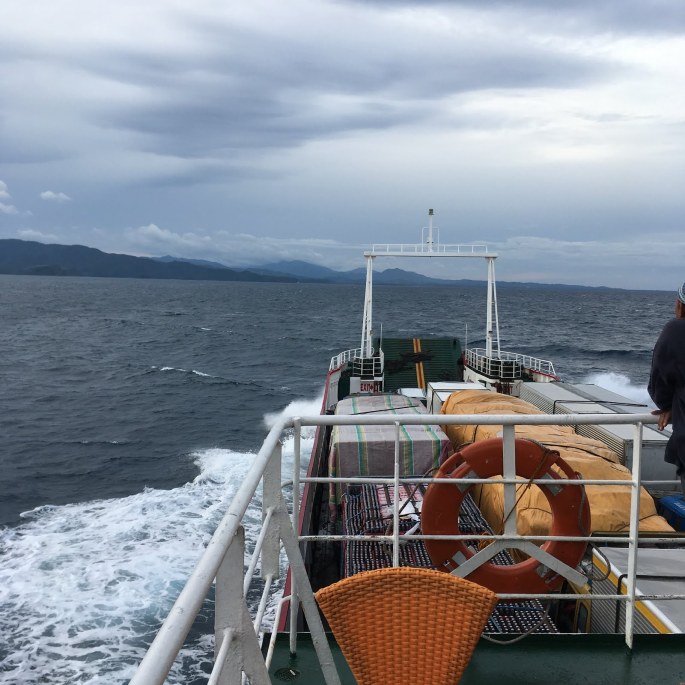 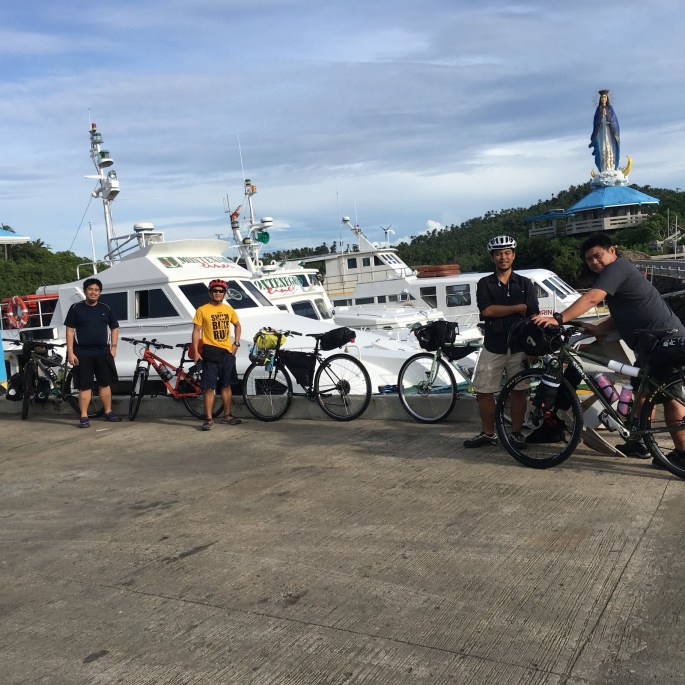 Ride out from the port 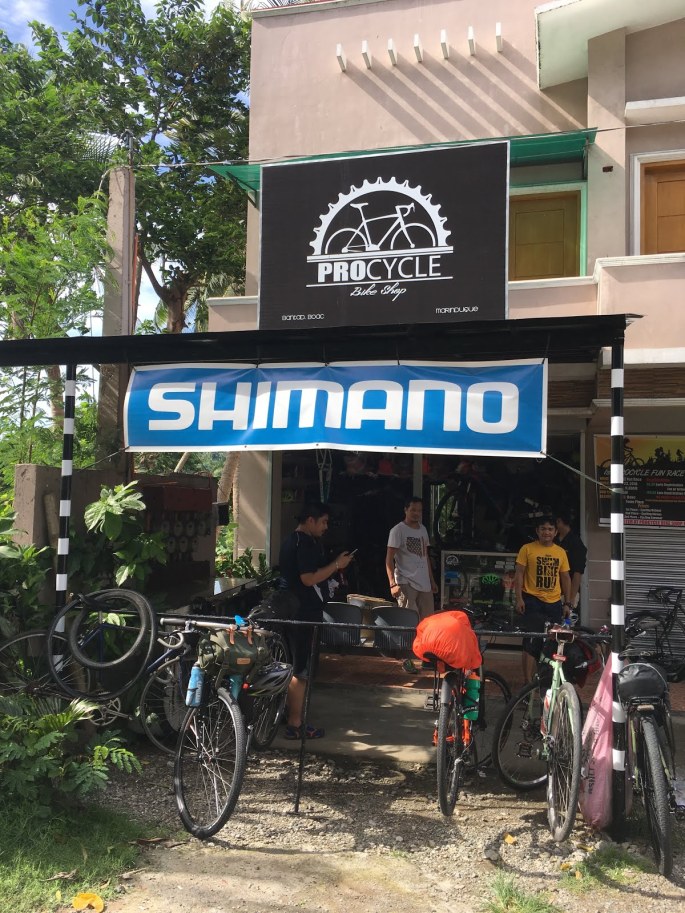 After breakfast, we continued our journey to the town of Boac, the capital of the island and visited the famous cathedral which was built in 1792.

Proceeding further, we biked to Buenavista and as locals claim, there lies the seawall-several kilometers of roads along the seaside…While the road was fairly good, there are several stretches of unfine contours of asphalt which may tend to be annoying if you’re going downhill as you really feel vibrations! Much of the climbs were encountered in this day and while I can say they aren’t as tough as the road to Baler, we definitely had a good sweat! 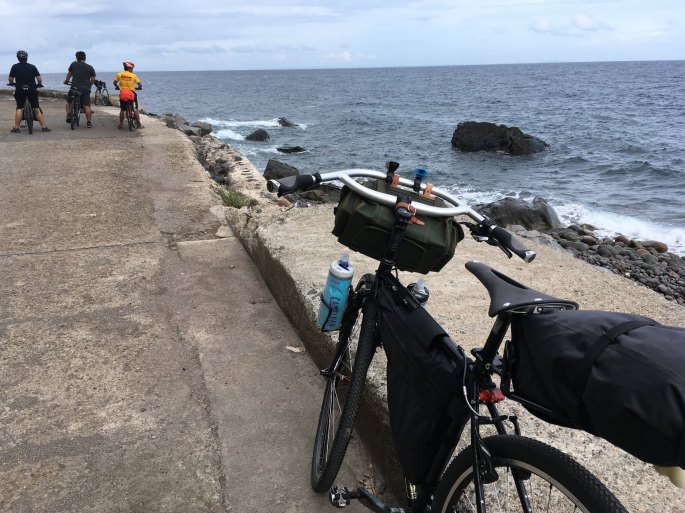 Sights along the seawall

Further into the seawall, you get to see the hotel that rests on an island. The Bellaroca is one of those exclusive and pricey hotels for those wanting privacy and an exotic experience. 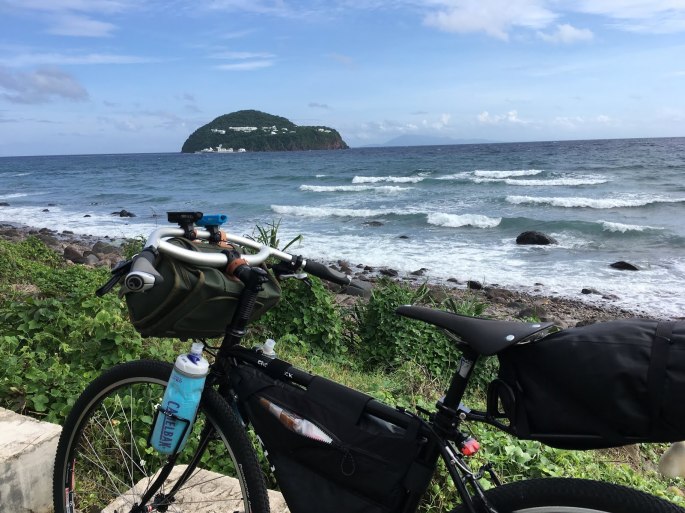 Reaching Poctoy white beach in Torrijos around 530pm, we checked in one of the resorts. True to what others say, the resort isn’t too crowded (probably because it’s the off peak season) and they charge a relatively affordable rate (1500 for a rooms which fits 5 people). There’s a restaurant and a couple of amenties provided.

On our second day, we woke up early to take pictures of the sunrise…beautiful indeed!

As the Sun Rises

Though we planned to rideout for Sta Cruz for our boat ride, we were advised by the locals at Poctoy to rent a private boat at the beach (costing 2500 for 5 people, but the boat can hold about 8-10)- so they can take us to two places as well as take our time…and that was one of the best decisions we’ve made…

boat ride to the sandbar

The first was the popular sandbar at the middle of the sea…this was the first time that I took a dip in that clean, blue water!

And the second was at Maniwaya island which had finer white sand and much fewer people (I think we were only ones at the resort as there was a scheduled wedding late in the afternoon!) 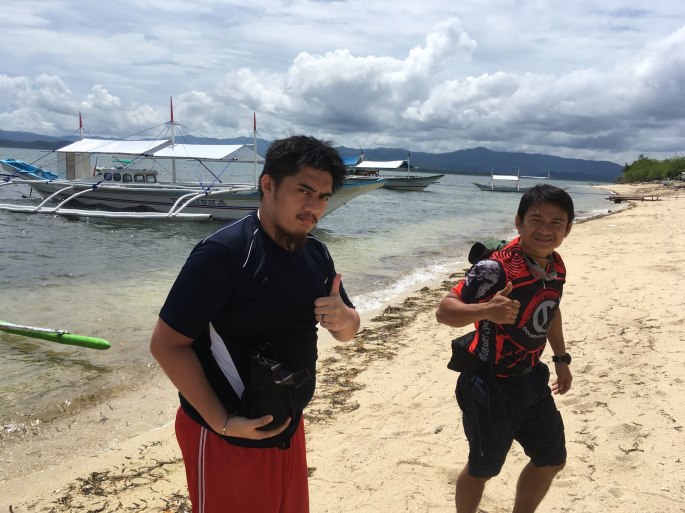 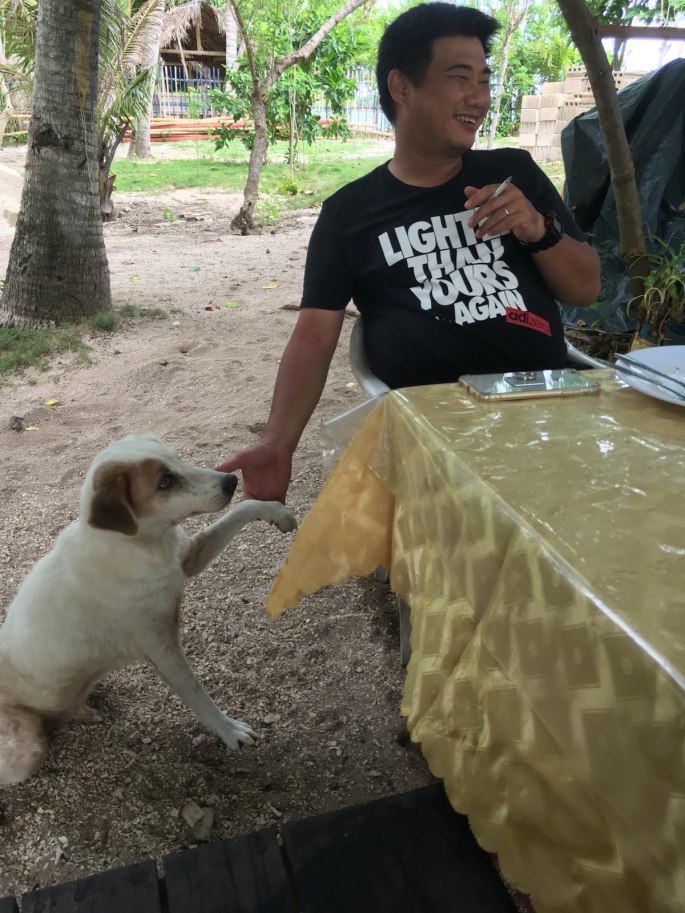 One of our friendly hosts who wanted our lunch

We got back to Sta Cruz port around 4pm and took a jeep to go back at Poctoy’s and pedaled our way to Sta Cruz again hahaha! While I admit that riding in the dark in an unknown place makes me a bit concerned, Marinduque is a wonderful place to do a nightride because there are very few vehicles…motorists are VERY careful (they don’t speed up and they wait for the right opportunity to overtake), almost no dogs chasing you (except one who was probably excited to guard his territory!)-one caveat though is that you have to bring really bright lights and blinkers to make sure you see the road as certain patches are under construction.

Reaching Sta Cruz around 8pm, we had dinner at the audition café (the food is great but you just have to bear with the unlimited karaoke sessions done while eating)…

We checked in at Jared’s hotel and while the staff wasn’t too welcoming (they inspected our stuff and needed IDs  and didn’t want to have our bikes parked inside the building but instead at the gated parking lot), the experience was fairly ok…

We left the hotel at 730am after a light breakfast of pandesal and coffee and proceeded to Balancan port…Compared to the second day-several climbs were encountered…while they have similarities with the Sierra Madre route in the east, the climb is manageable…we reached the port around 11am and had to make three quick stops—don’t forget to try the pancit in Mogpog-it’s 40 pesos good for two people and it tastes great! 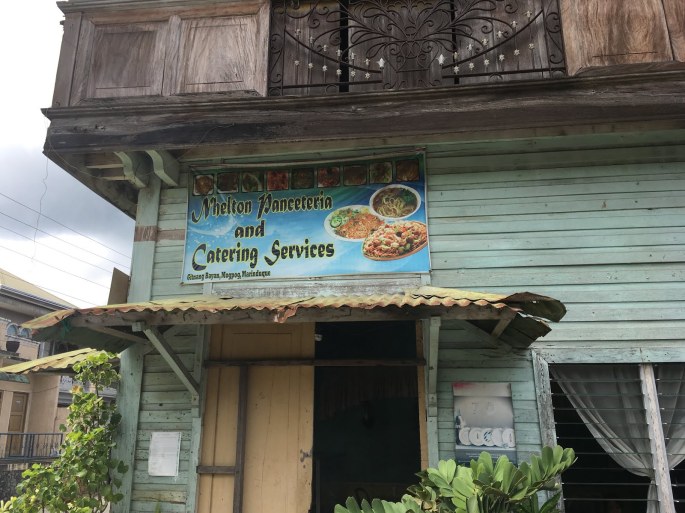 Before heading to the port, the owner of the panciteria told us to try visiting the Luzon Datum- the geographical center of the country…though we settled for the view deck as we saw several kilometers of elevation to the route, we satisfied ourselves with photo ops at the view deck a few meters before the port… 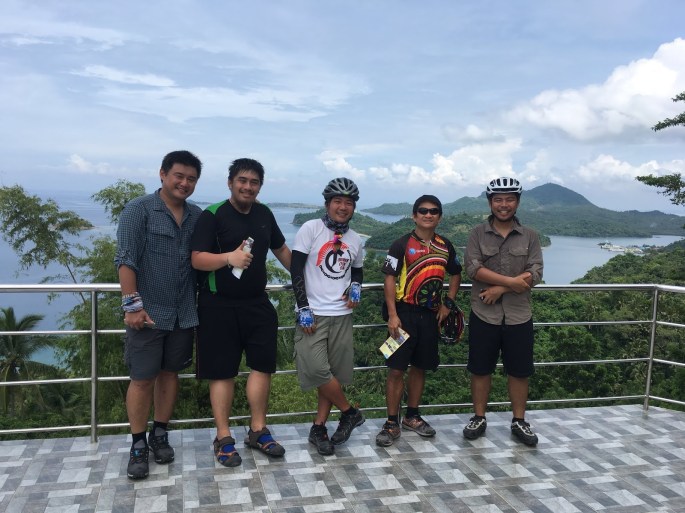 So much to view, so little time 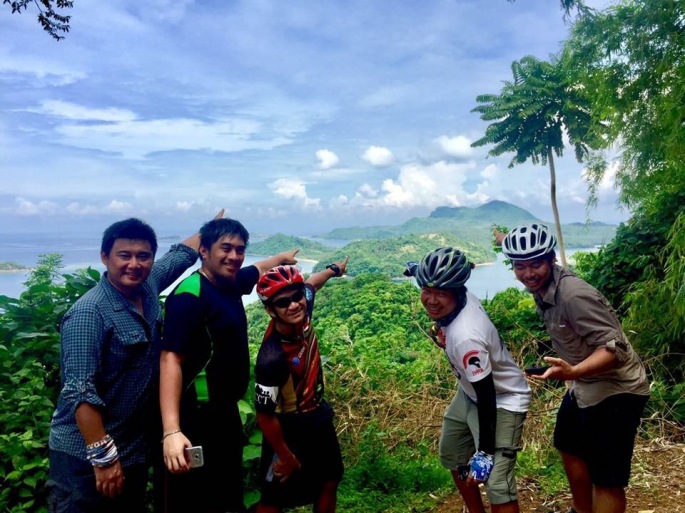 View of Luzon Datum from the View Deck

Overall, I felt that our Marinduque loop was a pleasant experience. true to its name as the heart of the Philippines, it breathes with life, nature and amazing scenery

You may check the strava route here

Bike Adventures and Other Stuff